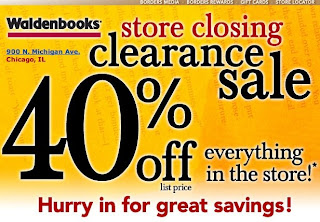 It’s probably not that surprising, but another big store is closing at the Shops at 900 North Michigan.  The Magnificent Mile’s northernmost mall is losing Waldenbooks.  The book seller has sent out “store closing” e-mail messages to thousands of (soon to be former) customers.

To be honest, the location wasn’t that great for the store and we’re surprised it lasted as long as it did.  900 doesn’t get as much foot traffic as the rest of the Boul Mich, and as you get higher up in these vertical malls the number of people wandering by dwindles.

It’s just the latest in a series of changes at the mall.  Ultra-high-end crystal purveyor Lalique closed its shop a few weeks ago.  That doesn’t appear to be the Chicago store’s fault, though.  Lalique has closed a number of its boutiques recently, including one at the Louvre in Paris that will become an Apple Store.  The Lalique space at 900 is being taken by an expanded Mont Blanc pen store.  But for the expansion, Mont Blanc is closed.  Just before the closing, Lalique’s manager was telling customers that it would re-open, possibly on Oak Street.

Also closed for renovation is the Oak Tree restaurant.  Oak Tree closed for a little while last year, too, but not for renovation.  At the time the wait staff told customers it was going out of business.  Now the staff is saying that it’s a renovation and Oak Tree will be back in the September/October time frame.

Also currently closed is the first floor of what used to be Club Monaco.  The store is keeping its second floor, but the first floor is becoming a Michael Kors store.  Closing the lower half means there is no longer any men’s items at that location.

Michael Kors also has its eye on the current Stewart Weitzman space for a second boutique.  We hear it will be a while before Weitzman moves out, possibly up to a year.

Overall it looks like a major play by the mall to make itself more upscale to compete or blend better with Oak Street and set itself apart from the riff-raff chain stores popping up all over Michigan Avenue (Best Buy, Crate and Barrel, etc…)  What might accomplish this better is if 900 figured out a way to convert its Oak Street-facing loading dock into a mall entrance.