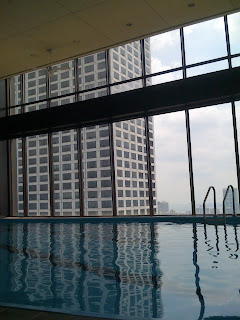 If you’ve never seen it before, drink it in.  That’s the pool for the residents who live in the John Hancock Center.  It’s a full-sized pool on the 44th floor of the building, which puts it about 500 feet in the air.  To date, it is the world’s highest pool.  But for how much longer?

With new megatowers coming online around the world almost every day it seems like a title that could be lost soon.  In Hong Kong, for example, many of the residential and hotel buildings like the MetroPark Hotel have pools of their roofs.  And while the Burj Dubai’s hotel only goes up to the 39th floor, there are residences above it — so the possibility exists that there’s a pool up there somewhere.  We won’t know until the joint opens next year.

Maybe the builders of the Chicago Spire can make a last-minute design change and put a little blue and wet on the roof of that building so that we can at least keep one record-setting title in the Windy City.