All cushions accounted for

Last night’s storms were among the wildest we’ve felt since moving to Chicago six years ago.  The tornado alert for Lincoln Park and Montrose harbor was bad enough.  But when round two blew through a few hours later, our building got hit many dozens of times.

Things could have been worse, though.  Take a look at the roof of 777 North Michigan Avenue (you may know it as the Wallgreen’s Building at Michigan and Chicago): 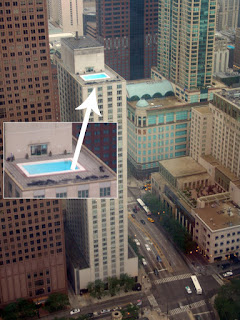 Ordinarily the rooftop pool furniture is aligned in neat little rows.  But last night’s winds pushed all of the chairs, lounges, and cushions into a big pile.  Remarkably, it doesn’t appear that any of it left the roof, which is good news.  Imagine your surprise if you got hit by a chaise lounge falling from a height of 30 stories.