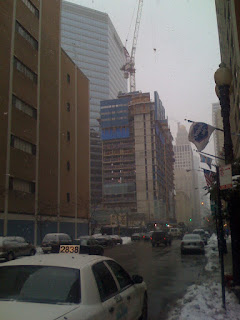 There’s something about walking around Chicago when it’s snowing.  It just seems right.  In winter we like to walk in the snow.  In the summer, we like to walk down steamy alleys.  What gives?

Back on topic: the latest round of snowycam pictures shows the progress of the Hotel Palomar at 505 North State Street.  To us it looks like it’s up to about the 17th story, and chugging along toward its goal of 36.

As much as we’re fans of density in River North, it’s a shame that the old park is gone.  Not many people used it, but it was nice to see a patch of green in the area, especially considering the number of surface parking lots just begging for vertical development.