A Fisher of Compliments 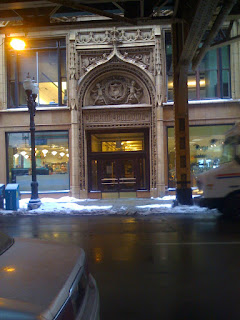 Chicago is one of those places where it pays to look up.  Sure, no one wants to look like a tourist, but at the same time many of the city’s architectural delights aren’t at eye-level.

Case in point: The Fisher Building.  This Chicago School masterpiece is loved by architecture enthusiasts around the world.  But unless you live in the building you may not have noticed that it’s best face is actually hidden beneath the elevated tracks on Van Buren street.  The snowycam photo above simply doesn’t do the relief justice.  The building’s main entrance on Dearborn Street lacks the elaborate ornamentation.  Instead, it’s saved for the dank, noisy side.

In a way, this makes sense.  At the time the Fisher Building was erected (1906) there was probably streetcar tracks running on Van Buren, and not the elevated structure we see today.  So the building actually did put its best face forward.  It’s just that the world revolved away from it.