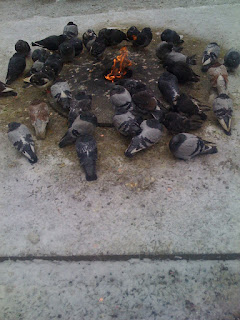 Every winter there is a migration of television microwave trucks from the garages of channels 2, 5, 7, 9, and 32 to the City of Chicago’s official warming center at 10 South Kedzie.  But what about the city’s pigeons?  Where do they go when the weather outside turns frightful?

The answer is Daley Plaza.  Unnoticed by most of the millions of people who wander through the plaza during the city’s frigid season, pigeons huddle around the gas-fed eternal flame.  It’s a war memorial that our feathered friends use as a means of survival.