Stick A Spire On It — It’s Done 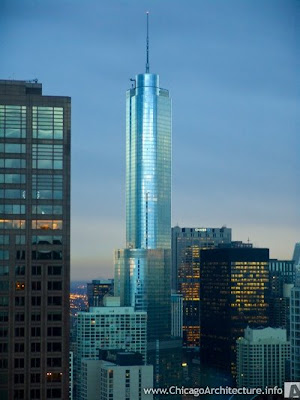 After years of waiting, the spire is finally on the Trump International Hotel and Tower in Chicago.  While the spire still needs a few tweaks before it can be called “done,” we’re not about to wait to take pictures.

But that’s the problem — the spire went up on an ugly, cloudy day.  Since then it’s been snowing on and off and the top of the building has been mostly hidden in the clouds.

That’s why we were lucky to get the snap above. Taken about 5am a couple of days ago, the clouds lifted and sunlight filtered in from Michigan to illuminate Chicago’s new trophy.  Hopefully the spire will be illuminated at night so we can take some great night time shots.