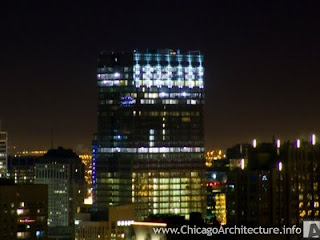 What’s this I spied late in the evening of January 5, 2008?  Why it looks like the beginnings of the promised illuminated crown at the top of 300 North LaSalle .

The drawings made public by Hines before construction began showed the top of the building all lit up and floodlights shooting into the sky.  Of course, architectural renderings have as much to do with reality as Arby’s has to do with fine dining.  But let’s hope that there’s more to come here — perhaps some panels to diffuse the light, because in spite of what the camera shows in the photograph above, the top of 300 looks less like a triumphant crown and more like a bunch of people accidentally left the lights on. 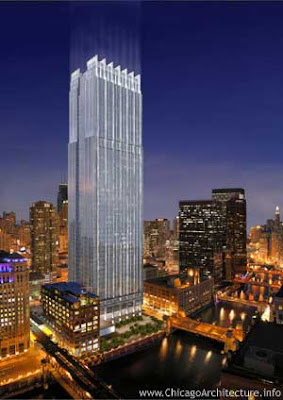 Here’s the drawing Hines sent over before construction began.
You be the judge.