It’s been one of the longest restaurant sagas we’ve seen in a while.  A year ago the Gaylord Indian restaurant moved to Walton Street from Clark Street, but only opened two weeks ago. 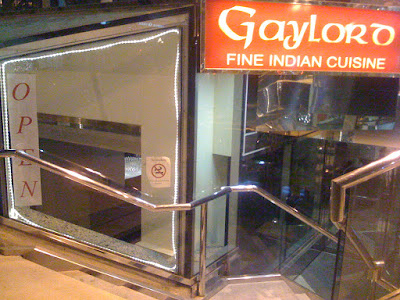 Gaylord got very good reviews at its old location, and something in the back of my mind tells me that the Chicago Tribune’s Phil Vettel called it the best Indian food in Chicago; but I might be imagining that.

Either way, it picked up a subterranean space vacated by some random fashion boutique in early 2007 and put up a sign pledging to open in April of that year.  Well, that date came and went with no sign of construction.  Then at the very end of June a sign went up stating the place would open in June.  Nope.  Finally, right around the New Year, Gaylord opened its doors to an adoring public.  Or not.

The sad fact is that of the half dozen or so times we’ve walked by the place has been empty.  Just a bartender and maybe a maître’d waiting for someone… anyone… with a hankerin’ for Indian food to come on down.

I don’t like Indian food very much at all, and I’ve tried it everywhere from fancy American restaurants to London takeaways to open air restaurants in the Little India section of Singapore.  I’ve given it a shot, but it’s not my cup of tea.

If you like Indian food, then do a good deed today and stop by Gaylord.  The last thing the Walton Street area needs is another vacant storefront.  And if the food is as good as it was at the old location, then you’re in for a treat.