One of the Streeterville/Gold Coast’s scuzzier blocks is getting some sort of clean up.

While hustling to the Red Line stop at Chicago and State in -17ºF weather, it was hard not to notice the big construction fence that has been put up next to McDonald’s and the big “DEMOLITION” sign hanging on it. 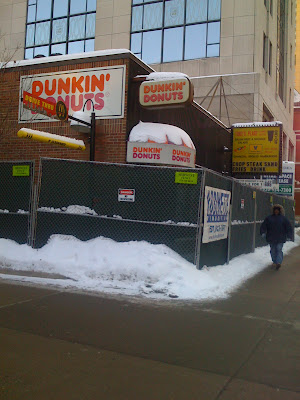 For those not familiar with the location, it’s on the north side of Chicago avenue wedged between the 24/7 McDonald’s on the State Street corner, and a Loyola University building on Wabash Avenue.  Three businesses are ringed by the demolition barrier — a Dunkin’ Donuts (that I’ve used more than once at 3:00am); Tony’s Place, a random hot dog joint; and an empty storefront.

The block is just nasty.  There are always groups of unpleasant-looking people standing around in front of McDonald’s, and scattered throughout are various panhandlers, junkies, and grifters.  The city streetlights are ineffective, so at night it’s flat-out scary for a lot of people.

I’m not sure what all those groups of people are doing there.  I’ve eaten at that McDonald’s a brazillion times, and sometimes sit looking out the window observing them.  They just seem to stand there.  They’re not waiting for a bus or a train.  I’m not sure what they’re waiting for.  Maybe they’re drug dealers, but usually there aren’t so many on one corner.

Whatever the case, the removal of these three seedy storefronts is a hopeful sign.  I’ve made a few calls to see what the plans are for the area, and I’ll post updates when I find out.

If you know what’s going in that space, post it in the comments.