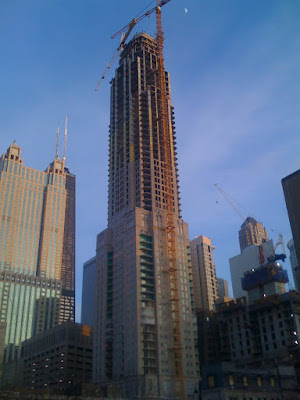 It’s tapering off!  It’s tapering off!  That means there’s reason to believe that The Elysian Chicago is going to top out soon.  When construction started we knew it was going to reach 700 feet, but didn’t envision how it would absolutely tower over everything else in the neighborhood.

Not that it’s a bad thing — the podium surrounding the roundabout driveway and the setbacks keep the building from giving off claustrophobic vibes.

There were a lot of people in the neighborhood who were against this project, but I think it’s coming along quite nicely, and I have high hopes that it will contribute more to Chicago than just its skyline.

Now about that ground floor retail….