Although it’s open and people are living there, the finishing touches are still being put on The Clare at Water Tower.  The shiny new East Pearson Street skyscraper is home to the Loyola School of Communication downstairs and a retirement community upstairs.

But on the roof there is something new — obstruction lighting. 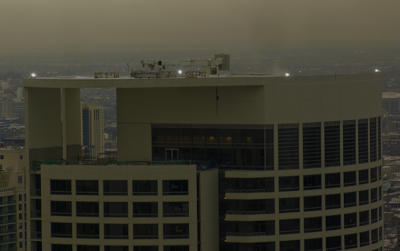 The aircraft warning devices were switched on yesterday afternoon (January 20, 2009).  There’s four white strobe lights during the day that switch to red blinking beacons at night.  It’s a nice addition to the skyline — if you happen to be viewing the skyline from the suburbs.

But the fact is that The Clare is only 589 feet tall.  That means its strobe lights flash into the homes of hundreds of its neighbors who happen to live in taller structures.  The Park Tower is the closest, but the Residences at the John Hancock Center, the Olympia Centre, Water Tower Place, and the Residences at 900 North Michigan are all seeing the glare.

Here’s a video showing the lighting by both day and night (better quality links below).  In the video you can see that the beacons are at a height that’s only about half that of The Clare’s neighbors.  So why does the new building need the lights at all?

Maybe it has to do with the new Children’s Memorial Hospital being built down the street.   The hospital plans to fly medical helicopters into the neighborhood, which is crowded with skyscrapers.  But why does The Clare deserve four strobes, when the Park Tower and others lack daytime illumination, yet are hundreds of feet taller, and hundreds of feet closer to the new hospital?
Our guess is that more aggressive beacons will be coming to those buildings, and others, in the future. 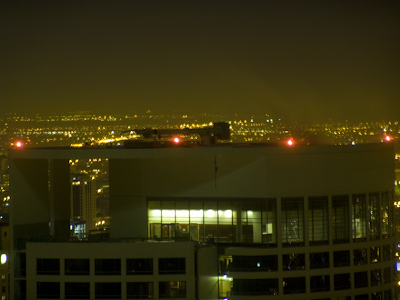 What would be nice is if a feature could be installed where the pilot phones ahead, and an automation system activates the beacons only when they’re needed.  Such systems are in common use at small airports across the country.  It could be a way to reach a compromise between the safety of the emergency flights and neighbors living with what looks like an all-night disco outside their windows.
Higher quality: YouTube version of the video .
Highest quality: .Me version of the video .