While Chicago has more options than most cities for public internet access, it’s not exactly the ubiquitous presence we were promised in the late 90’s.

I’m a huge fan of Starbucks, its girly coffee-flavored drinks, and especially its very reliable internet access.  Back when it was T-Mobile only, it was more than worth the $39.99/month I spent on it to be able to pop into a ‘Bucks from Chicago to Atlanta to Los Angeles to get some work done while on the road.  A single invoice I was able to squeak out from London Heathrow airport just ahead of a deadline was more than enough to justify the expense.

But free is good, too.  And there are more and more free, and semi-free (buy a coffee first) options.  One of the more overlooked is called Jazzman’s Café. 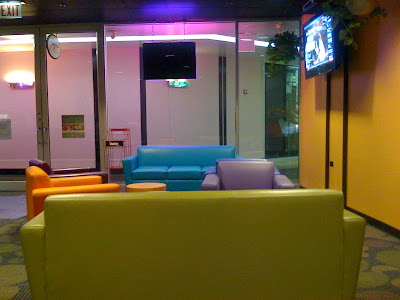 The lone Chicago outlet of this French-owned chain that we’re aware of is deep in the bowels of the Thompson Center in the Loop.  It opened a year ago and is tucked in behind the escalators that lead down to the food court and if not for the neon glow of the “Free Wifi” sign, it might be missed.

Of course, nothing is free in this world, so here’s the skinny — buy something to eat or drink and you can use one of their computers for 15 minutes.  Bring your own laptop and buy something and you get to use the wifi for what appears to be an unlimited amount of time.

The speed is good, though the reliability is not.  Many internet addresses simply won’t resolve, or do so sporadically.  Google Maps and YouTube are particularly glaring examples.  But if you just need mail and a little basic web surfing, it’s a good option.

The decor is straight out of a Don Johnson nightmare, but security is good which means the chances of being accosted by a beggar or having to smell a vagrant sleeping at the next table is near zero, especially compared with the average Starbucks.

Prices are average, and an array of sandwiches supplements the modest bakery offerings.

So if you’re killing time in The Loop and can’t fathom why Lavazza still hasn’t gotten on board with the whole internet thing, then this is probably a place to keep on your radar.