Signs of Life at Chicago Place

I wouldn’t believe it if I didn’t see it, but we have photographic proof that something is actually happening at Chicago Place.

For those of you who don’t know, the once not-all-that-bad vertical mall in a prime spot in the heart of the Michigan Avenue shopping district (heck, the food court is within wifi sniffing range of the Apple Store!) is just a husk of its former self.

Chicago’s main Saks Fifth Avenue store still functions, as does Talbot’s, but that’s it aside from the food court way up at the top.  The ground floor is unheated.  The escalators have been turned off.  According to a Sun-Times report, there’s just one working elevator to take people up to the delights of Panda Express and what may be the only McDonald’s in the developed world that doesn’t take credit cards.

For a  years we’ve heard talk about converting the dead stores into hotel space, or a big box store, but nothing has come to fruition.  Then this happened: 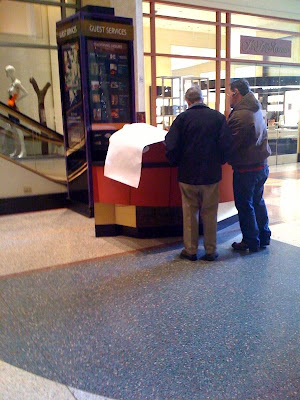 This is a cameraphone snap e-mailed to us by a reader.  It’s clearly the former Customer Service desk from back when Chicago Place had customers.  Those appear to be blueprints spread out across the desk.  Judging from the jeans and boots, the men are architects or engineers, not real estate or developer types.

It’s not much, but it’s the first hint we’ve gotten in a long time that anything positive might come to Chicago Place.