A year after construction crews popped the top off of the Blue Cross Blue Shield Tower to add another 25 stories to the 32-story structure, things are starting to wrap up. 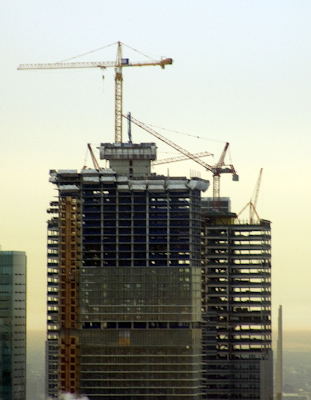 Over the weekend (Saturday, January 24, 2009) the eastern crane (on the left in this picture, obscured by Aqua) began to slowly come down off of the tower.  That means the Blue Cross Blue Shield of Illinois building has reached its maximum height of 796 feet — quite a change from 411 feet before.

Also of interest is the slice of building on the far left of the photograph.  This is 340 On The Park, a condo tower.  When most people bought their units there they could look down on BCBS.  Now it’s right in the faces of people who used to have western views.  Ah, the hazards of real estate in the big city.