The good news is that we’re not on crack.  A few weeks ago I published a blog entry about the renovation of the CTA State/Lake elevated station .  As part of the renovation, the facade is now illuminated by color-changing LEDs.  It’s very cool, especially with the Chicago Theater and WLS Television marquees right next to it.

When I published that entry I thought that maybe I’d been seeing things.  Someone who worked on the station renovation even wrote that he knew nothing about it. While I haven’t been able to get down there on foot at night lately to confirm what I saw, I did at least see it again. 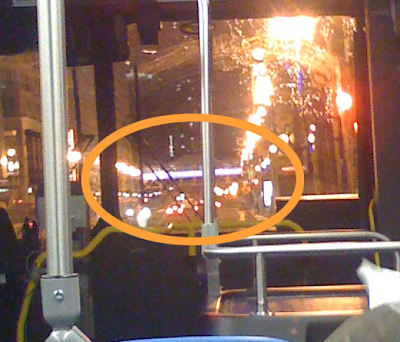 Once again — on the 151 bus heading north on State Street, just before the turn eastward on Washington there it was again in all its glowing glory — the “light bridge.”  I’ve circled it in orange in this crappy camera phone picture  (yeah, I know my lawyer will have a fit for publishing camera phone pix shot on a CTA bus).

I really am going to make an effort to get down there and shoot it properly.  It’s silly since I live and work maybe a dozen blocks away.  But somehow something else always comes up.