New Barney’s Building Open For Business, But Not Barney’s

The first business has opened in the new Barney’s New York building on the corner of Oak Street and State Street.  But it’s not Barney’s that’s open — it’s Citibank. 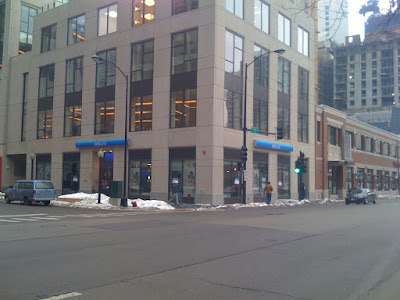 The bank moved from its old digs next to the Esquire Theater on Oak Street on January 15th, and opened its doors in the new location on the 20th.  The lobby has that new bank smell, but the bank as a whole is much smaller than the old location.

It’s nice to see an oft-overlooked segment of North State Street getting some attention, but to tell the truth we’re worried about the future of Oak Street with festering cavity that is the Esquire becoming a polyp on the retail scene there.  But then again, we should just have faith that something will happen with the property eventually.  After all, a watched boil never pops.