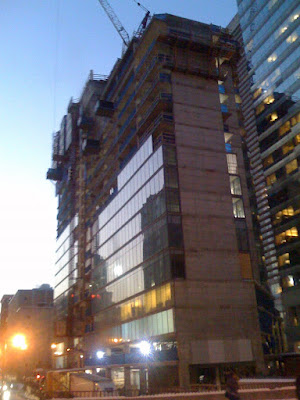 Sure, AMA Park wasn’t an official park, but it was a nice patch of green in an area of the city that desperately needs some breathing room.  But there’s no point is crying over it any longer, since this is the future.

“This” is the Hotel Palomar Chicago (505 North State Street), brought to us by the Kimpton Group — the same people doing (IMHO) a great job with the Hotel Monaco, Hotel Allegro, and the Hotel Burnham.  This is Kimpton’s first hotel in Chicago that isn’t built into an existing historic building.

As you can see, the new building just inches from the beloved AMA Building (the striped building with the big hole in the top at 515 North State Street) is moving along quickly.  There’s already glazing on the lower floors so interior work can proceed in defiance of the winter winds.

When completed, the building designed by John Buck Company will be 380 feet tall, have 36 stories, and boast 259 rooms.  That means it will be about 60 feet taller than the AMA Building.  It also means that some of the rooms should have a view right through the hole in the AMA Building.  Now that’s a postcard I can’t wait to see.