What’s in a Name? An Obamanation.

Lots of people are trying to cash in on Barack Obama’s ascendency to the White House.  We’re happy the hype is over and the nation’s first half-black president can finally get to work and do some good.  But while the balloons and confetti are done flying in Washington, Obama is still being celebrated here in Chicago. 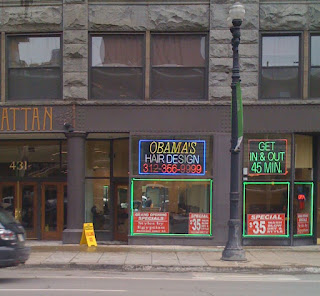 Yes, that hair salon is called “Obama’s Hair Design.”  It’s in the Manhattan Building (431 South Dearborn).  I guess if Walgreen’s can cash in with six months of Obama merchandising, we can’t begrudge a local entrepreneur from attempting the same.  Still, this seems more appropriate in Hyde Park than in the Loop.
Obama’s Hair Design (actual address is 433 South Dearborn) is owned by Mahmoud M. Elsheikh.  He registered the name with the state on November 12, 2008, one week after the election.  The name had to be re-registered because of a typo on the 25th (it happened to us once, too).
Changing the name to “Obama” was probably not such a bad idea.  The business’ previous name was Ossama’s Hair Design.  Talk about an opportunity landing in your lap.
There are actually eight companies in Illinois with “Obama” in their names that are not campaign-related.  There’s a barbecue joint, a tax company, the afore-mentioned hair salon, a souvenir web site, and even a trucking company.