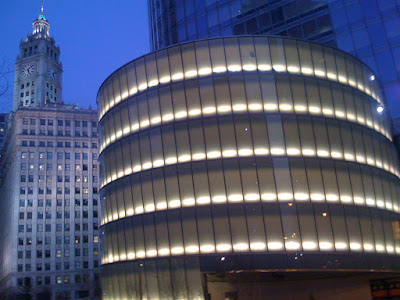 While the building is still not completed, and the reviews are mixed, Donald Trump’s Trump International Hotel and Tower is starting to grow on us.  The spire on top helps make it seem more complete, even though we dismiss it as a height manipulation stunt.  But the base is not without its charms.

The public sidewalk is still closed, but the parking garage is open and that necessitates a way to get in and out.  In this case, local shop SOM designed an illuminated helix tacked on to the north side of the tower.  The lighting is nice and adds a good bit of visual interest to what could have just been a hole in the wall.  SOM did a similar helix with another of its supertowers, the John Hancock Center.  But in Big John’s case, it’s only lit up during cold weather because the lighting is actually heat lamps to keep the outdoor ramp from icing up.

We still aren’t in love with the top of Trump’s Chicago tower, but the bottom is turning out nice anyway.