The Biggest Mall in South Korea is… Chicago!

These days lots of companies are cutting corners.  One of the ways they tend to do it is to skimp on their art production.  Instead of hiring professional graphic artists to design their web sites, they get the C.E.O.’s nephew Jimmy to cobble together an embarrassment of a web page.  Who cares, as long as it’s cheap?  And instead of hiring a professional photographer to shoot their property, they’ll just grab some exciting stock photos and clip art off the internet. Who cares, as long as it’s cheap?

Well, as three French internet providers found out a few years ago when they all picked the same shot of the same girl to splash across their home pages, stock photography is rarely the right answer.

Case in point: The I’Park Mall in Yongsan, Seoul, South Korea.  It’s the largest in that country, so it must have cost tens, probably hundreds, of millions of dollars to build.  But the “penny wise, pound foolish” people in charge didn’t spend a couple of thousands dollars to have the property photographed.  Instead, they used a stock photo of Chicago’s North Michigan Avenue on their web page to illustrate the dynamic shopping experience at I’Park Mall. 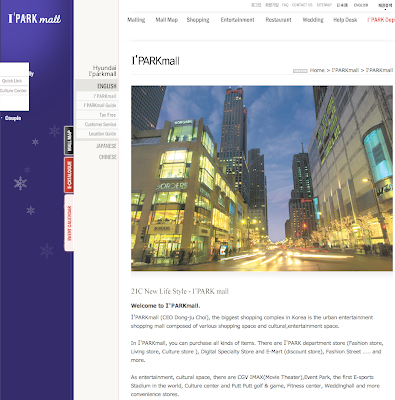 The photo in question has to be at least five years old.  It has the old “Marshall Field’s” sign on Water Tower Place , and the old red Westin logo instead of the new blue one on the Westin Michigan Avenue .  Judging from the red lights at the top of 900 North Michigan , the photo was shot around Valentine’s Day.

So let this be a lesson to all you big wigs out there — if you cheap out on the photography, you’ll only end up embarrassing yourself in the end.