Have you seen the new subway entrances that the CTA is using in the Loop?  They’re nice.  They remind you of the quaint Quincy elevated station (the only CTA station without advertising). 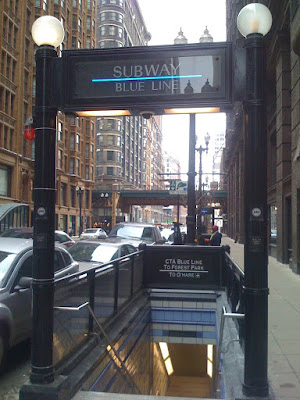 When a pack of businessmen in trench coats and fedoras flush out of the tunnel during rush hour it just feels like you’re looking back in time.  I’m not sure if Chicago is the only city in the world where men still wear fedoras and pork pie hats, but I’m grateful that some things haven’t changed.  Especially when you consider the alternative. 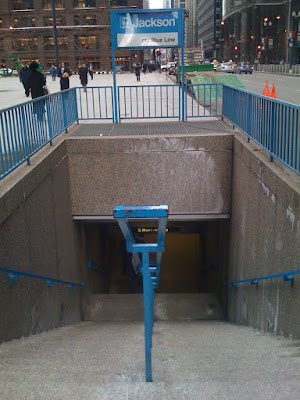 This monstrosity is just a block away and represents the worst of the city’s mass transit architecture.  According to Chicago-L , this entrance is from the mid-80’s based on designs from the 70’s.  It looks like it.  Utilitarian in the worst sense of the word.  But there’s relief just two more blocks away. 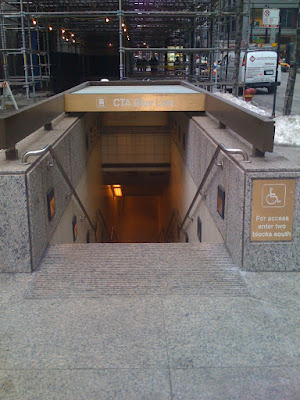 Unlike London, Tokyo, Paris and other cities, there aren’t many private subway entrances in Chicago.  This may be the only one.  It’s in front of the Chase Tower (10 South Dearborn) and instead of having layers of caked-on blue paint, it features nice brass plaques and stonework that matches the nearby plaza.  Chase finished this project in 2008 and the results are great.  Though most people don’t think of it, it’s a little gift to the city from the bank.