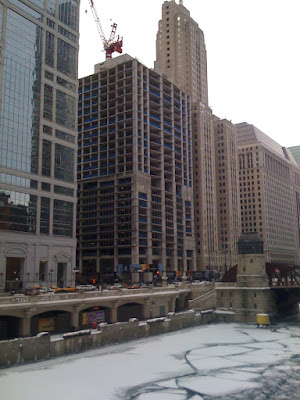 Is it cruel to publish a status report on Waterview Tower ?  I was walking by the other day and decided to shoot this photo for posterity.  The Tribune reported a couple of weeks ago that the workers packed up their tools and left.  Now all we have is a quarter of an empty shell of the building we expected.

I feel bad for Waterview.  I used to live around the corner and even considered buying a condo there.  Now I’m glad I didn’t, because I’d be worrying about my deposit.  At what point is a building declared dead?  Chicago has a few dead skyscrapers, but none are in so prominent a location.  Maybe some clever advertising person can wrap the thing in Tyvek and use it for a giant billboard like they do in Eastern Europe.  It’s better than looking at a mud-colored skeleton hunched along the Chicago River.