Chicago has far more beautiful blue sky days than any city in which I’ve ever lived.  Especially in the spring and autumn, it can seem like an enchanted place.

But Chicago is far from pristine when it comes to its air.  Much of the time it looks beautiful because we’re standing on the ground, looking up into the blue sky.  But the air around us is filthy.

And here’s a photo illustrating the problem: 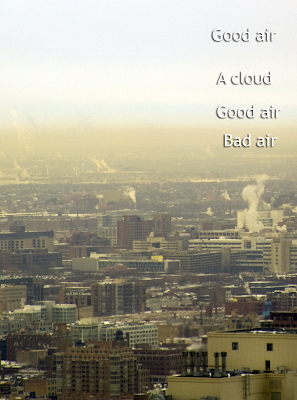 That slice of muck at the surface is polluted air.  At the time this photo was taken, the Air Quality Index was at 126, which is “Unhealthy for sensitive groups.”  But if you were to go outside and look up, it would just appear to be an ordinary overcast day.  The true extent of Chicagoland’s pollution only unveils itself when you’re up in the good air looking down on the bad.