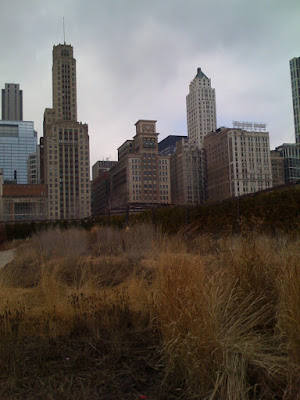 It was a slow and tedious process, but the top of Six North Michigan Avenue is finally complete.

It’s been shrouded in tarps and scaffolding since at least 2003, probably longer while restoration work was done on its crown and the inside converted from offices into condos.  The shroud came off this winter and the result is pleasing.  It’s also nice to see another residential option on Michigan Avenue.

But there are a couple of things that could have been done better.  First, the redeveloper could have come up with a more imaginative name.  Of course, the idea was to cash in on the “Michigan Avenue” cachet, but it would have been nice to somehow incorporate the building’s original name: The Montgomery Ward Tower.

Second, it would have been fantastic if the building could have been restored to its pre-1947 condition.  In that year the ten-story tower was taken off the top of the building along with a three-story pyramid roof, similar to the one that used to cap the tower at the Dearborn Street Station.  Seeing 6 North Michigan Avenue in old pictures is kind of startling at first, but it goes well with the Pittsfield Building to the north and the Willoughby Tower across the street.