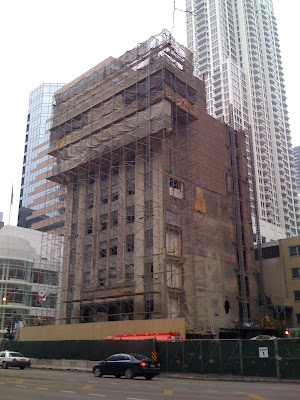 Things are chugging along at the heart of North Michigan Avenue where the Ritz-Carlton Residences are going up.  The building in this photo is actually not part of the project.  It is being protected while the ritzy digs go up all around it.

Garrett’s Popcorn, Starbucks, and the Terra Museum of American Art were all torn down to make way for the new high rise which will have just 33 homes in it.  Hanig’s Footwear had to move to the John Hancock Center where it appears to be doing very well.

With those buildings gone, we can see a glimpse into the city’s architectural history.  The demolition has allowed sunlight to once again penetrate the eastern wall of the building which abuts this property to the west (Sanitary District or Railroad Pension building or something).  Those office workers better not put any plants on the window sills, though because the new building going in is going to be huge.

At 500 feet tall, the Ritz-Carlton Residences is going to reach even higher than its neighbor, City Place which will suddenly be plunged into shadow for much of the day.

Worse off is the Express store on the ground floor.  It’s already struggling to lure in foot traffic by putting up giant “Open During Construction” signs.  What happens when Chicago Place across the street goes under construction to convert it into an office building?  Will anyone even see the Express behind all the Jersey barriers?