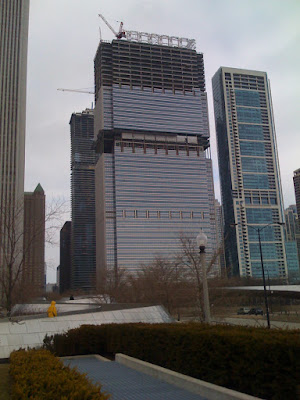 You can’t call it “complete” yet, but “topped out” seems appropriate for the vertical expansion of the Blue Cross Blue Shield Tower fronting Millennium Park.  If you get our Twitter feed, you were alerted a while back when the eastern crane was taken off the building.  Now it looks like most of the structural work is done and we can finally start calling this building 57 stories instead of 32.

The vertical expansion is an unusual thing to see, even though there are several buildings in downtown Chicago and the Loop that were intentionally designed to be extended in height later.  Some of them are even from the 1800’s.