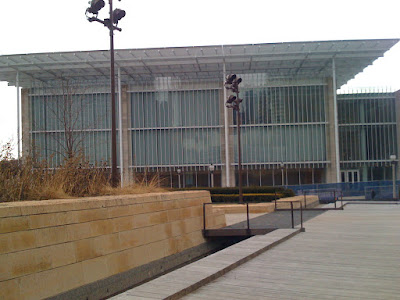 As good downtown neighbors and proper Loop boosters, I know we’re supposed to be all excited about the new Modern Wing of the Art Institute of Chicago, but I just can’t seem to get there.

To me it looks more like an aircraft maintenance hangar than a museum.  For all that I’ve read about dramatic angles, prophetic use of space, and the intricacies of manipulating natural light it still just looks like another midwestern glass box to me.

I’ve heard from some people who’ve been inside.  Real people, not toffee-nosed architects or pointy-headed academics.  They assure me that it is truly a breathtaking experience.  I’ll have to take their word for it until I, and the rest of the public, can get in there later this month.

Sure, it’s got a Renzo Piano stamp on it, but I can’t help but feel like the “starchitects” we looked to in the 80’s and 90’s for inspiration have gone off their feed.  Gehry’s become a one-trick pony.  Hadid churns out fantasy after fantasy but hardly any get built.  And did I.M. Pei go into Witness Protection or something?