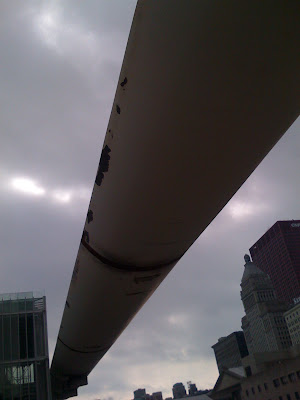 After yesterday’s mini-rant about the Art Institute’s Modern Wing, it seemed logical to follow that up with an update on the bridge that will link the museum with Millennium Park.

The 620-foot-long bridge has a Renzo Piano pedigree and like most modern architecture is simple in design.  In fact, it’s a big white pipe cut in half.  A culvert, really.  Which I guess is symbolic or ironic or something since it’s supposed to “funnel” people into the park from the museum.  Clever.

Did we really need to spend a brazillion dollars to have Piano tell us to build a pipe?  And did we even need a bridge in the first place?  I’m not questioning the utility of finding a way to get thousands of tourists across Monroe Street.  I’ve seen enough of them almost get creamed while jaywalking with their noses buried in their pop-out maps.  But was a bridge the best way to go?  Couldn’t we have sent them under Monroe along the existing pathway at a fraction of the price?

Regardless, the bridge is here and I’m going to try hard to learn to love it.  Currently it has a lot of nasty rust all over it and it looks like a broadcast antenna fell down.  But come spring when it’s all nice and shiny and painted I hope I’ll find it’s the next best thing to sliced bread.  Or one of those pop-out maps.