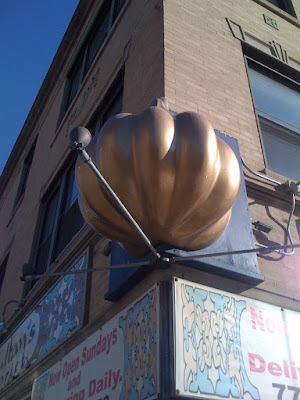 Back in medieval times, shopkeepers would make elaborate and iconic signs to give the illiterate masses an idea of what wares lay inside their stores.  In a sense, this golden garlic bulb is an apropos icon for a Middle Eastern restaurant. 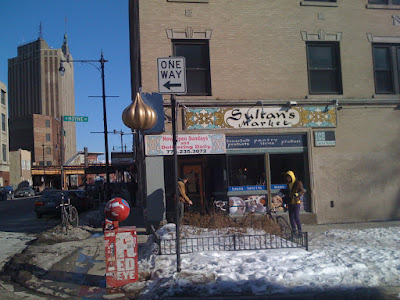 The Sultan’s Market has a corner space a block away from the Blue Line in Wicker Park.  The menu features the usual fare you’d expect from a Midwestern-ized version of Middle Eastern food (satay, baba ghanoush, etc…), but the decor harkens back to a lost era when traveling across the Middle East was exotic and young European women disillusioned with modern life wandered into the desert in search of Arab princes.

Of course, if you’ve traveled in the Middle East these days you know things are very different.  If it weren’t for the calls to prayer echoing from minarets around the city you could very easily forget that the mall Starbucks you’re sitting in isn’t in Houston or Los Angeles, but a suburb of Istanbul that is virtually indistinguishable from Schaumburg.

(By the way, if you’ve got a thing for Middle Eastern architecture, then you might enjoy our sister site: Middle Eastern Architecture .  It’s a little heavy on Turkey and Dubai, but it’s coming along nicely.)