I have to admit it — I’ve eaten in Beef and Brandy.  For those of you who have managed to avert your eyes all these years, here’s the low-down:  It’s a hard-core old-school Chicago lounge in the heart of State Street (127 South). It’s a throw back to the days when classy businessmen in fedoras would down cocktails with their compatriots after work before catching the train home, and not just sip a beer from a paper bag on the L while snuggled in their hoodies and baseball caps ( I’m taking to you, Wrigleyville.)

The days of martini lunches are long gone, and while the food is still fine at Beef and Brandy, the place has a serious layer of funk that makes the Marquettes seem like white tablecloth establishments.

But in the six years I’ve been in Chicago, for some reason I only just recently looked “up” at the building that houses Beef and Bird.  Let me tell you — I was surprised and annoyed. 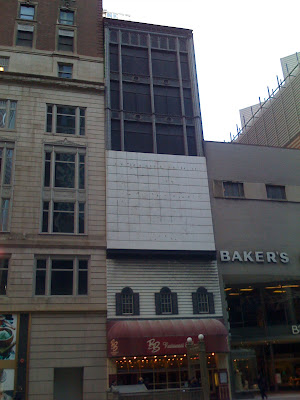 The bottom of Beef and Brandy’s facade is done up in something that resembles a suburban white clapboard home that the office workers of yore were intentionally avoiding.

Above that is a layer of white panels — the kind that get slapped on buildings in the 1950’s to make them look modern when all original thought is lost.

But the top three floors survive in what I can only hope is their original condition.  Delicate, elegant Chicago architecture emerges from the horrors bolted to the facade below.

The AIA Guide to Chicago skips this building entirely, but from what I can find elsewhere, it was built in 1920 and those upper floors actually have a handful of offices in them.  Let’s hope that the ongoing renovation of State Street (including the Palmer House right next door) preserves this building and restores it to its 1920’s look.