As construction has progressed on the new Barney’s New York store at the corner of Oak Street and Rush Street, it’s been surprisingly hard to find out when the new 90,000 square-foot shopping mecca will open. 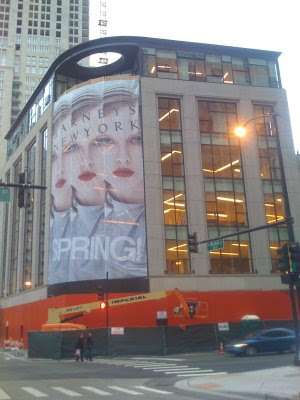 Many stores would put up big “Grand Opening” banners with dates to generate anticipation.  The best we’ve gotten out of Barney’s is “Spring” — and quite possibly for good reason.

As we reported a little over a month ago , the plan was to close the existing Barney’s New York on March 15th and open the new store April 2nd.  That’s not exactly how it’s going to be.

Construction delays have Barney’s pushing the whole thing back so that the new tentative opening we’re hearing is “late April.”

Considering that “Spring” in Chicago can mean anything from March 1 to June 30th, having a vague date on the signs makes the planners at Barney’s look like the smartest kids in the class, rather than ones who blew an opening date.