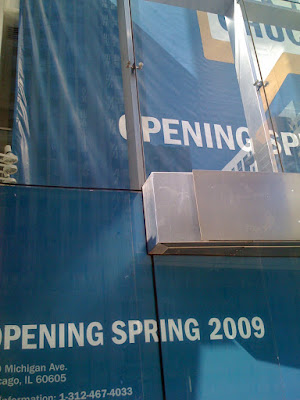 For the last few months we’ve been watching this huge sign at 430 North Michigan Avenue promise that a new branch of the Charles Schwab investment house is going to open on the Magnificent Mile.  With the state of the economy right now, all we can say is, “Really, Chuck?  Are you serious?”

It was back in March of 2005 that Schwab’s parent bank in Reno, Nevada filed an application with the State of Illinois to open an office at 444 North Michigan Avenue .  A couple of years later, it decided to go all storefront next door in the Realtor Building .

But will the Schwab expansion plans continue in this rough economy?  With a shroud hiding the inside of the store, it’s hard to tell.  But considering the amount of advertising Schwab continues to pump out in print, TV, and transit there’s still reason to hope that the “Spring 2009” date will pan out.