Who’s Boutique Is It Anyway?

In the last few years, Oak Street has undergone many changes as high-end retail fled the suburbanization of Michigan Avenue retail and filtered into the side streets of the Gold Coast.  Dozens of boutiques have moved in, moved out, or traded spaces jockeying for just the right position on the leafy corridor.

But never before have we seen two businesses claim one space. 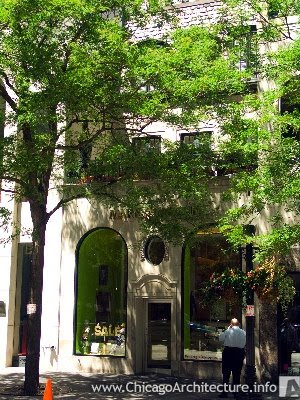 At the time it was home to the Marilyn Miglin boutique.  Then on January 2, 2009 Miglin closed up for what its web site calls “renovations.”  A sign on the door promised the boutique would return.  In fact, the sign is still there.  This photo was taken March 21st: 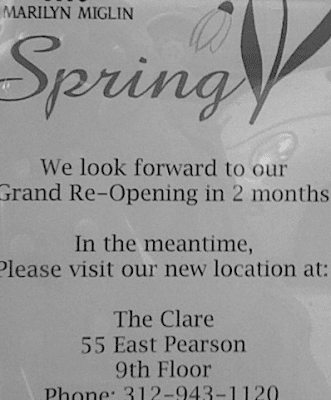 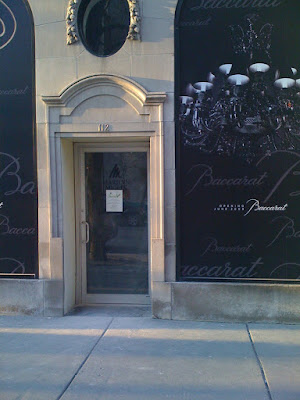 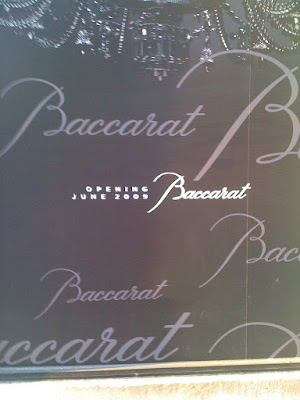 Yes, the king of crystal is coming to Oak Street.  And according to the full-window signs, plans to occupy 112 East Oak Street in June of 2009.
Currently, Baccarat only operates a small in-store boutiquelet at Macy’s On State .  It will be nice for it to have a showplace of its own, and one in a better location.
Baccarat will nicely complement Harry Winston and Graff Jewelers across the street.  Moreover, it will hopefully keep the once-coveted, but now-pedestrian Swarovsky from opening its one millionth store on Oak Street, and keep the Austrians firmly in Water Tower Place with the legions of bus-tour Iowans in Mom Jeans.
We placed a call to the number on the Marilyn Miglin sign in search of clarity, but got an answering machine.  We’ll try for a human again later.