Barney’s On The Move 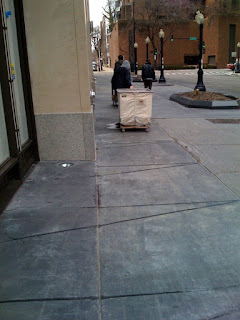 Barney’s New York was closed today for the first day of it’s big move across Rush Street. The long-awaited transition cones after years of demolition, construction and preparation.

Papa Milano’s Italian restaurant, a bar, a cupcake joint, a button store, and a Bang & Olufsen outlet either moved or closed to make way for the new department store.

Barney’s management had long been unhappy withthe diminutive size of the previous space. Unfortunately, the upgrade cones in the midst of a bad economy where even luxury shoppers are asking shopgirls for plain brown bags to hide their consumption.

Hopefully the new store buying frenzy won’t cool off too much and bring a little more life to Rush, Oak, and Walton Streets.

Tourists aren’t Barney’s usual customer, but these days no store is in a position to turn its nose up at a dollar. Hopefully someone will tell that to the unnecessarily snooty black-clad makeup mob that will now put the “sell” in cellar.