The Past Hangs Over the Chicago River 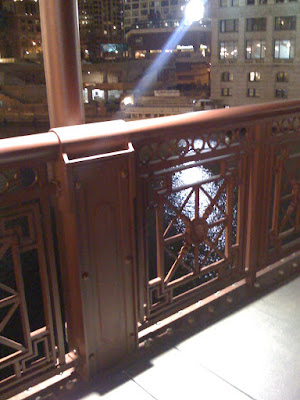 Traffic is back to normal on the west side of the Michigan Avenue Bridge now that the rehabilitation project is half over.

The boring 1970’s rusted beige picket fence that once made up its pedestrian rail has been replaced by a replication of the original 1920’s version.  It’s not an exact copy of Edward Bennett’s design, because that would allow children to get their heads stuck in the pattern or possibly let leashed pets fall through to the water below.  The new pattern is close, but the gaps are smaller to meet the new (oh my God, think of the children) safety standards.

Interestingly, the rehab of the bridge cannot change the weight of the bridge too much or it won’t be able to open.  The bridge is a bascule, so balance is key.

The pedestrian walkway has also been replaced with a better non-skid surface with more spaces to let rain and snow through to the river below, but the spaces are much narrower so you don’t notice them until you’re already ready to step over them.  That should also help reduce the standing water that caused the old non-skid surface to deteriorate and blister.

The total cost of the project, including the Beaux Arts handrails is $3,500,000.