The Loop’s Most Peculiar Building 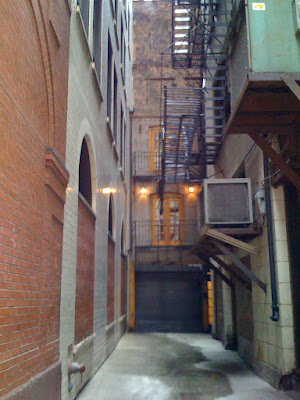 To the untrained eye, this is just another random alley in the Loop.  But if you know what you’re looking for, this is a rare sight, indeed.

This is the Pickwick Stable — an actual farm stable in the heart of the Loop.

Official records have the date this stable was built at 1892, but those records are notoriously sketchy.  The Chicago Tribune says it’s actually 1857, which would make this one of the oldest buildings in the Loop.

The stable was built for Henry Horner back when much of the Loop was still farmland.  Since the horses left the Loop it has been used for a number of purposes, most often as a restaurant.

This picture is a rare snap.  Every time we’ve walked by it in the past either the gate is closed, or there are cars parked in the alley.  Sadly, since our last visit it looks like the historic cobblestones that once lined the alley have been replaced by concrete.

Interestingly, the stable is for sale.  Ask your favorite real estate consultant to look up 22 East Jackson Street 60604 for you.

If you’re looking for more farming artifacts in the Loop, there is also a cattle path which still exists amid the skyscrapers of LaSalle Street.