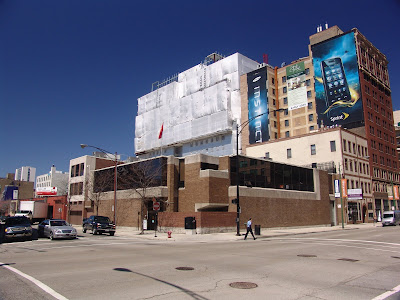 OK, so it’s not exactly secret.  But this building and its occupants certainly aren’t drawing any attention to themselves.  The bunker-like structure is the consulate of the People’s Republic of China.  Of course it makes sense that a city the size of Chicago would have a Chinese consulate.  But you wouldn’t expect it to be across the street from the Walgreen’s next to the Flagship McDonald’s .

The strange location probably made sense back when this building opened.  River north was a far more tourist- and resident-hostile area back then.  And if you were going to build a bunker, plopping it amid the working warehouses and light industry of the area was a pretty good way to not draw attention to one’s self.

The only way you can tell what this building is these days is by the Chinese flag flying from the roof, the crowd control barriers that sometimes pop up around it, and the paper notes in Chinese that are often taped to the front door glass listing times and days that visa applications are taken.

(Oh, and before anyone gets their undies in a bundle about the “Godless Communist” quip in the title, by law everyone in China is a member of the Communist party, and China is officially an atheist state.  So “Godless Communist” is factual.  And yes, I’ve been there.  I’ve got four stamps in my passport from China.  Don’t bother hassling me unless you have more.)