There is a long history of big companies using Michigan Avenue to pump up interest in their products.

In the summer barely a day goes by when some business doesn’t have its marketing department interns standing on a corner handing out free samples or coupons or other items to grab the attention of thousands of people passing by who are already in a shopping mood.

In the past we’ve picked up everything from boxes of cereal to ice cream bars to tote bags to stuffing… yes, stuffing… simply for being in the right place at the right time.

In the last five years or so some companies have upped the ante by opening entire stores on Michigan Avenue not so actually sell their wares, but to serve as a marketing presence.  The companies don’t care if the stores make money or not.  They exist simply as a billboard in a billboard-free zone and a way to give people a chance to touch and feel their products — something TV, newspapers, radio, and billboards simply can’t do.

Notable examples include the Nokia Store, which is still open, though for how much longer is anyone’s guess.  There was also a Motorola Store which briefly took up residence in the space that once was the Terra Museum of American Art (now demolished).  After Motorola moved out, Digiorno opened a pizza parlor there, selling its frozen pizzas as if they were fresh.  The latest company to pull this stunt is Target. 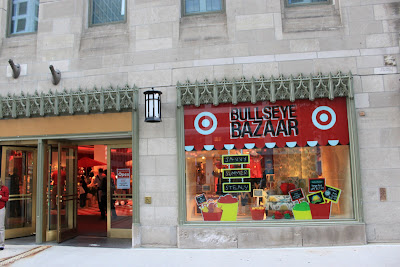 The Minneapolis retailer, known locally for rapidly accelerating Marshall Field’s downhill slide into oblivion, already has a location in the South Loop, and another in the Lathrop Homes neighborhood.  But for the tens of thousands of people who live in the Loop, Streeterville, Near North, and Gold Coast  the “Bullseye Bazaar” is their first chance to simply walk into a Target store in their neighborhood.

When we were there, the place was packed.  And from what we’ve heard, it’s always packed.  Target shopping bags (nice paper ones, not the plastic ones from real Target stores) can be seen up and down Michigan Avenue as office workers, locals, and tourists sample things they normally can’t get in their hometown Target.

And that’s what’s important with this store — it carries items that the regular Target stores don’t.  That opens up its potential customer base from just the locals to everyone walking through the area for business or pleasure.

The merchandise and decor ares almost exclusively tailored for women, but there’s enough middle-of-the-road items to keep the boyfriends and husbands occupied while they trail their wives and girlfriends through the two-story shop.

The store is constructed inside what used to be the McCormick Tribune Freedom Center, an extravagant exercise in self-congratulatory naval-gazing put together by the same people who for 20 years praised themselves for doing a great job while they ran the Tribune Company into bankruptcy.  Before that, it was a museum it was a Hammacher Schlemmer store, so this is something of a return to retail for a building that was originally called the “WGN Building” when both radio and TV had their studios on Michigan Avenue.

As far as retailing publicity stunts go, this was a success.  The store got a full week of television, radio, and newspaper coverage.  TV stations did live reports all day from the store.  The shoppers who went got treats both visual, and commercial (we bought a hat).  And since the store was only open for three days, it wasn’t a threat to the local unions that have fought so hard to keep large retailers out of the city.

More than the Motorola Store, the Nokia Store, or even the Digiorno Store, Target’s Bullseye Bazaar was a retailing event on a street that has seen many come and go.  Other companies should study what Target did and emulate it.  But still keep the free ice cream samples coming.