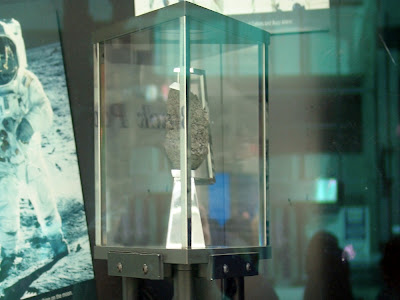 In an effort to showcase the magnificent architecture of Chicago’s Tribune Tower, and to help people understand just how powerful and influential the Chicago Tribune newspaper once was, the Chicago Architecture Blog presents: Chicago Brick of the Day.
Today’s brick is from:
The moon.  An actual moon rock is one of the main displays at the Tribune Tower.  Chicagoans take this for granted, but this is incredibly rare.  A ten ounce moon rock has an estimated value of one million dollars.  I don’t know how much the Tribune Tower moon rock weighs, but it looks like it could be about ten ounces.
Each day we’ll show a photograph of a rock, brick, or other piece of stonework embedded in the exterior of the Tribune Tower .
If you haven’t done it yet, play tourist for a couple of hours and wander around the outside of 435 North Michigan Avenue and marvel at an architectural work that will not be equalled in our lifetimes.