Picking an Homage to Daniel Burnham

As you read this, a distinguished panel of architects, urban planners, and other city insiders is deciding what is the appropriate way to honor the only man in history to have more impact on the shape of Chicago than either Mayors Daley.

His name is Daniel Burnham, and whether you see the city today as the fruit of his loom, or as a botched attempt at half-greatness, it is undeniable that he, quite literally, laid the blueprints for today’s Chicago — and for many other cities, including Washington, DC; Cleveland; San Francisco; and Manila in the Philippines.

Last Friday a field of 20 local and international architecture firms narrowed down to three finalists presented their ideas for a grand monument honoring Burnham to a committee at a very closed-door meeting deep inside the Chicago Cultural Center.

The three finalists are:

The original field of 20 architecture firms invited to enter the Burnham Memorial competition was heavily criticized for including only 15 Chicago firms.  But two-thirds of the finalists are locals.  Also interesting is that local starchitecture firm SOM didn’t make the grade.

The process has also come under fire for not yet including the public.  That is to come, organizers note.  They defend the process thus far by saying that contest rules laid out by the American Institute of Architects are being followed.  But that wasn’t enough for people at an informational meeting in Grant Park last week. 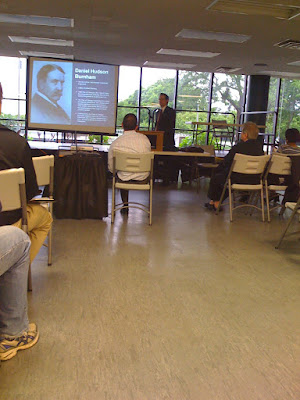 Members of the audience felt like they were being asked to approve a plan and a location that they haven’t yet seen.  The presenters promised that everything will become clear as soon as a winning design is chosen.

That decision will be announced June 19, 2009.  Until then, everything is very hush-hush.

The organizers of the competition feel that the firms competing can do their best work if left to their own devices and not subject to public scrutiny at such an early stage.  There were particularly harsh words for Chicago Tribune architecture critic Blair Kamin, who has been an early critic of locating the Burnham Monument at the southern end of Grant Park near the Field Museum and of the process, itself.  Organizers think Kamin’s criticism is premature and he should wait to see the actual results before he lobs stones from the Trubine’s bully pulpit.

In an ideal world, public meetings to gather input on the finalist’s design will be held this summer, after the June 19th unveiling.  Fundraising for the monument would happen shortly after that, and the organizers hope to be able to start moving dirt in 2010.

All we know so far about the designs comes from Ed Uhlir — the same guy who honchoed Millennium Park — who said, “Each one is extremely different.”  Feedback from the 20 firms that were invited to the competition ran along the lines of this being a very challenging project.  Put bluntly, “this was very hard.”

Once the final design is chosen, there will be public exhibitions showcasing all of the entries.  The first one will be held at the Field Museum, then the show will go on the road, possibly to various schools and community centers across the city.