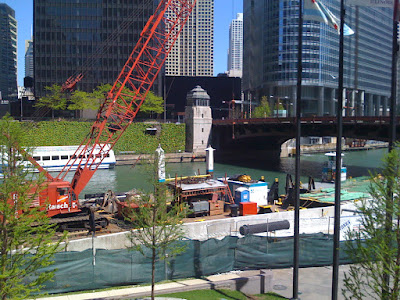 Chicago is hardly the first city to open a commercial riverwalk.  San Antonio was the American pioneer back in the 1930’s.  Other cities as far away as Seoul and as close as Indianapolis also have riverwalks, and cities like Houston and Singapore are trying to figure out how to make it work for them.

But since this is a Chicago-focused blog, here’s a picture of the continuing work on Chicago’s riverwalk.  While there are a few restaurants open this year along with a museum and a bicycle rental facility, 2009 will not be the Summer of Riverwalk in Chicago.  But next year looks hopeful.

Still, if you have an opportunity, have lunch at one of the pioneering restaurants taking a chance on this waterside experience.  They’ll appreciate your business and you’ll do the entire project a little good.