We already know that Hizzonor is not happy at all with CBS backing out of its pledge to turn its Block 37 space into a public spectacle.  Surely, he’s probably even less happy with recent reports that WBBM-TV wants to dump its streetfront studio in favor of a cheaper facility on the second floor.

The first sign that things weren’t going to turn out right at 22 West Washington Street (“22!” Get it?) was the giant screen placed above the showcase studio.

The architects of the building specifically designed it so that WBBM-TV would put screens all around the corner of the building.  Instead, the people in charge of channel 2 at the time cheaped out and only put one small screen in the center of one side.  The result is the mess of exposed beams that Chicagoans are exposed to each day: 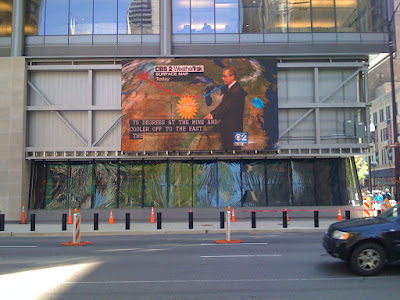 If there’s any shame left in the television industry, this should be rectified.  There are new people in charge of the channel 2 newsroom these days and fixing this monstrosity should be on their project list.

Here’s a mockup of what it should look like: 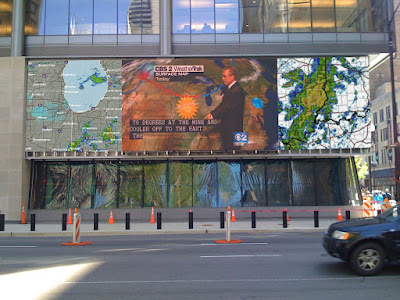 Even neon advertising billboards would be better than what’s there now.  If CTA buses can have LED boards, why can’t channel 2 fill this space?  Just lease it out to Clear Channel like the CTA did.

(Full disclosure: I am a former employee of WGN-TV, and many moons ago worked for CBS in a couple of other cities.  I also know a couple of people who work at WBBM-TV, but hold no particular ill will for the station.)