Editorial: Shame of the City: Daley With His Hand Out 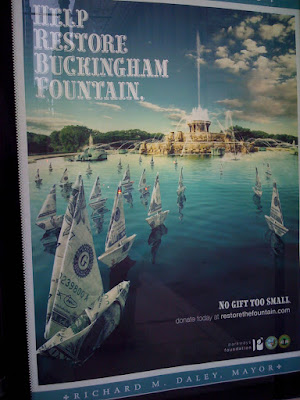 If you haven’t seen one of these posters already, look for one to pop up on a city information sign near you soon.

There’s a fund-raising campaign to put together enough money to fix up Chicago’s iconic Buckingham Fountain .  How sad is it that Mayor Daley has to have his hand out to tourists and others to ask for donations to fix something that is not only city property, but a city icon.  And with the mayor’s name right below the appeal.

The monument at the center of Chicago’s “front lawn” that has been featured in dozens of films, hundreds of books, and millions of post cards can’t even be taken care of by the city that hosts it.  Imagine the open for “Married With Children” without Buckingham Fountain.

It’s bad enough that the city deferred needed repairs so long that it got to this state.  It’s an embarrassment that the public is being asked to make up for the mismanagement.  Perhaps the mayor’s office could go through the last few years of Sun-Times headlines to figure out where there’s waste in the administration.

More information or to make a donation, visit: http://restorethefountain.com/