When the Ethel’s chain of coffee/chocolate houses abruptly pulled the plug on its Chicago operations, several spaces were left vacant.

Some, like the one on Lake Street, are still empty.

The one in the Shops at 900 North Michigan Avenue has been converted into an awkward seating area for weary shoppers.

As far as we can tell, only the one at the Shops at North Bridge (“the Nordstrom mall”) has found new life. 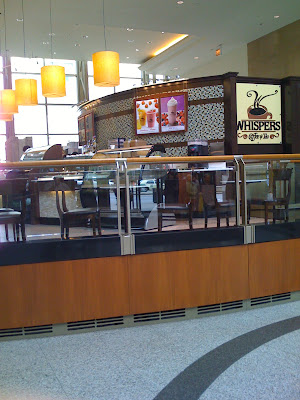 A Whispers cafe has opened in the prominent space right in front of the Michigan Avenue entrance.  If the name sounds familiar, it should — it’s the same as the intrepid Gold Coast kiosk coffee shop that operates in the center of Viagra Triangle (also known as Mariano Park).

Though Whispers has a loyal following in its home neighborhood, we can’t help but feel bad for it during Chicago’s long winters.  Hopefully having this location available year-round is the start of better days for the operation.