A Bit of Country in the City 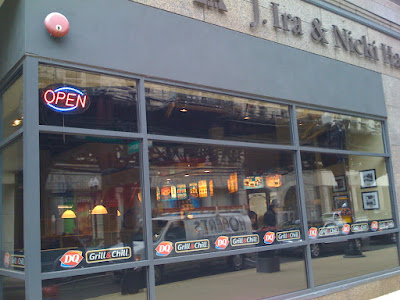 When I moved to the Midwest six years ago I expected one benefit would be greater access to Dairy Queens.  After all, Chicagoland abuts “America’s Dairyland” so it only made sense that there would be one on every corner, just like there’s one in every small town in Texas.

Alas, it was not to be.  Being a Looper, my choices were the limited hours of the DQ in the basement of 69 West Washington Street, or hiking up to North Southport and hoping my trip didn’t coincide with a game at Wrigley Field.

Now, there is a third choice.  A full service Dairy Queen has opened in the heart of Columbia University’s campus in the same Wabash Street building that houses Chicago’s American Youth Hostel.

It had a soft opening in May, and is now fully operational.  Best of all, it’s a Midwest-flavored Dairy Queen, not the East Coast variety I grew up with.  That means burgers and other hot food, and not just ice cream.