For the third time this summer, an abandoned storefront on Michigan Avenue has been turned into an advertising billboard.

The first time was at the old Bennigan’s at the Illinois Center.  Snickers quickly snapped up its prominently located windows for full-size banners touting the confection.

Then when National Community Bank moved out of the corner of Lake and Michigan it was quickly covered with a giant yellow ad for beer, complete with a giant video screen. 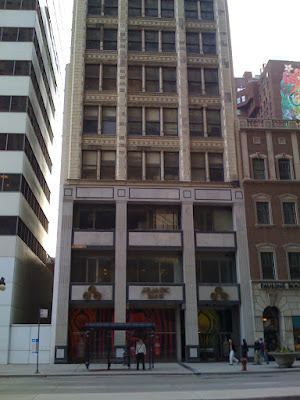 Now, the old Greek National Bank space just north of the Smurfit-Stone Building has been plastered over with another ad for alcohol.

Advertisers are desperate to reach the numbers and demographics of Michigan Avenue, but with zero billboard space they’re resorting to more and more sneaky methods of squeezing in.  See our article about Target’s Bullseye Bazaar earlier this year.  How much longer before a real billboard opens up on Chicago’s most coveted shopping street?