It was with breathless excitement that the press releases flew late last week — “Burnham Pavilions In Millennium Park Now Open!”

Well, yes and no.

One Burnham pavilion is open — the one designed by Ben van Berkel of UNStudio in Amsterdam.  The second one, by Brit/Iraqi/Persian/Iranian/Whateverthemediademands architect Zaha Hadid is still a skeleton (pics below).

Tourists are getting a kick out of van Berkel’s unnamed trippy bifurcated table.  There’s a handicapped access ramp built into the thing which encourages people not only to sit on it, but to touch, feel, and walk around it.  It’s simple, but still truly interactive art.  It engages people in a non-threatening way and begs people to touch it.  While so much art these days admonishes people into “thinking” and falls back on the “challenge” cliché, the team at UNStudio has made fun art for a fun place. 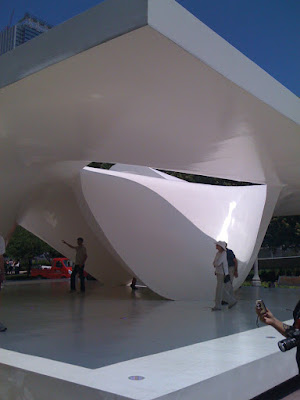 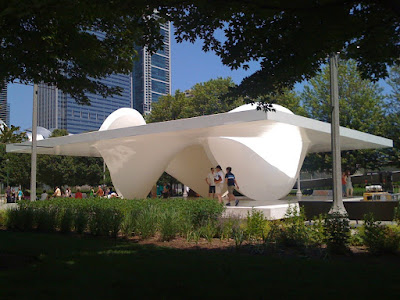 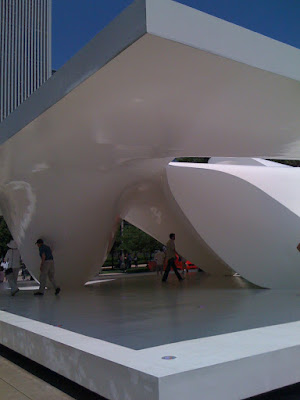 We’ve heard that the pavilion looks really cool when it’s lit up in purple at night.

Its companion, the big oyster looking creature by Hadid, is still not quite ready.

Workers are busy turning the rib cage into something resembling the starchitect’s drawings.  It looks like it should be ready in a week or two.  But there is one curious thing — 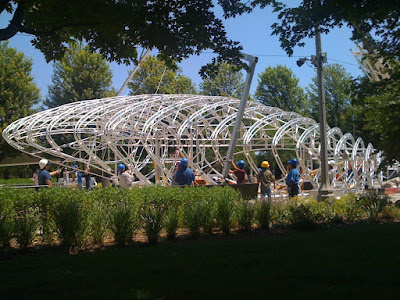 When we visited, workers were erecting a tent over the sculpture.  Hopefully this is temporary device, perhaps something to do with the process of stretching a skin over the ribs.  It would be a shame if the finished pavilion was actually inside, not outside. 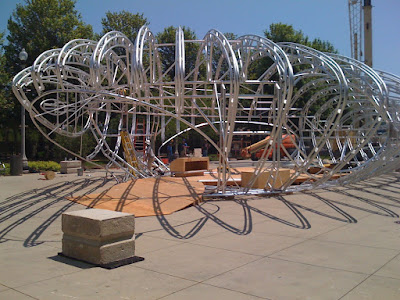