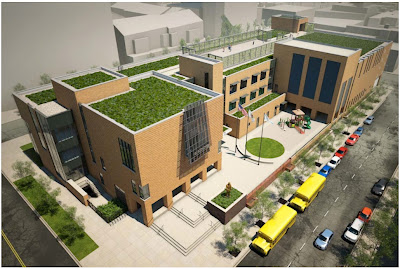 If you’re a fan of the combination art nouveau and prairie styles that are combined in the Gold Coast’s William Ogden School, then you’d better admire the work soon.

Demolition of the elementary school is scheduled to begin next month, with a replacement school going up next year.

The new school will feature 30 classrooms, four labs, a library, gym, cafeteria, and parking garage squeezed into a block bounded by Oak, Dearborn, State, and Walton.

The three-story structure will be under a series of green roofs and a rooftop playground, similar to the kind many urban prisons have.

If everything goes to plan, construction of the new school will begin in April, 2010 and students will be heard in the hallways for the January, 2012 semester.

You can read more about the new Ogden School in this PDF: New Odgen School