This past weekend, Chicago’s Riverwalk officially opened.  Those who supped there at any of the half-dozen pioneering restaurants that set up shop last year will wonder exactly what “officially open” means.

Basically, you can now walk from Wabash Street to Lake Michigan uninterrupted by the Michigan Avenue bridge. 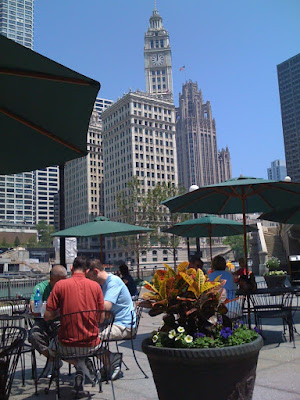 Some better signage and a critical mass of restaurants and retail will go a long way toward making the riverwalk a destination for locals and tourists.

I went there this week and had a very nice lunch at the riverwalk outlet of downtown staple O’Brien’s pub.

Though Chicago is nearly 80 years behind places like San Antonio when it comes to riverside dining, the design of Chicago’s is far superior to what exists in The Alamo City.  Chicago’s riverwalk is wide and inviting, with good (though inadequate) landscaping.  The San Antonio original can be very crowded to the point where you’d afraid of tripping over a luminaire and falling through a tree beard (local lingo for Spanish moss) into the river.

In Chicago, there are no such fears as there is plenty of space for both restaurants and rollerbladers.  The railing helps, too.

If you haven’t been, it’s worth spending at least one sunny summer afternoon having a late or light lunch on the riverwalk.  The city has a long way to go, but at least it is going — full steam ahead.